Dr Joss Winn has recently written an opinion piece for the Times Higher Education website, reporting on the recent conference, Making the Co-operative University.  In part, the conference builds on research that Joss and Prof. Mike Neary have been undertaking into co-operative higher education since 2010.

“Last week, the Co-operative College, established in Manchester in 1919, hosted a conference on ‘Making the Co-operative University’ with the intention of exploring its role in supporting and co-ordinating a federated model of co-operative higher education.

Throughout the day, there was a sense of anticipation and historic responsibility among the 90 delegates who were told that in 1909, W. R. Rae, Chair of the Co-operative Union educational committee, had addressed the Union and stated that “What we want and seek to obtain is a co-operative journey that will end in a co-operative university”.  Writing at a time when there were only 15 universities in the UK, Rae saw the development of a co-operative university as another example of members providing for themselves where the State did not: “So long as the State does not provide it, we must do, as we have in the past, the best we can to provide it ourselves.””

Read the full article on Joss’ blog and further reports from the conference on the Co-operative Higher Education bibliography.

On 5th April, Mike Neary, Katia Valenzuela Fuentes (Nottingham) and Joss Winn presented a paper at The Co-operative Education and Research Conference, 5-6 April 2017, Manchester.  It is the first report from their Co-operative Leadership for Higher Education project.

A new journal article by Joss Winn has recently been published in Power and Education journal. For the first time, it reviews the emerging literature on co-operative higher education and offers a coherent theory of academic labour, the academic commons and critical pedagogy, based on our work on Student as Producer.

“I begin this article by discussing the recent work of academics and activists to identify the advantages and issues relating to co-operative forms of higher education, and then focus on the ‘worker co-operative’ organisational form and its applicability and suitability to the governance of and practices within higher educational institutions. Finally, I align the values and principles of worker co-ops with the critical pedagogic framework of ‘Student as Producer’. Throughout I employ the work of Karl Marx to theorise the role of labour and property in a ‘co-operative university’, drawing particularly on later Marxist writers who argue that Marx’s labour theory of value should be understood as a critique of labour under capitalism, rather than one developed from the standpoint of labour.”

You can download this article from the journal, Power and Education.

A pre-print version of this article is available from the University of Lincoln research repository.

An earlier and expanded version of this paper given at the ‘Governing Academic Life’ conference is also available from the University of Lincoln research repository.

Joss Winn recently gave a keynote talk at Newcastle College’s ‘Student as Producer’ conference. You can read the full script of his talk on his blog. 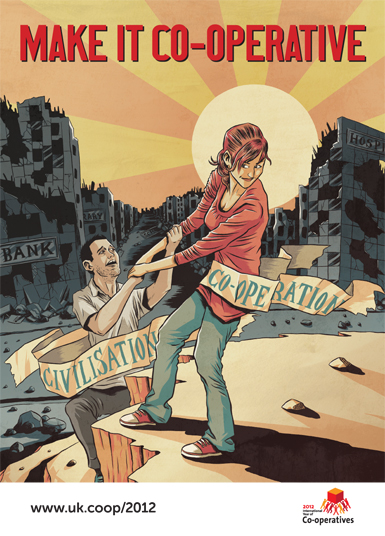 “Newcastle College should be commended for recognising the need to involve students in the governance of your institution. In your own HE Partnership Strategy you state that “meaningful partnership working is reliant upon the equal distribution of democratic power.” You argue rightly that this isn’t just achieved by listening to the so-called ‘student voice’ but by “empowering students to drive and implement change.” And “this will involve redistributing power across our HE communities up to and including HE Academic Board through engaging students in all stages of the decision making process.” My question to you is how do you intend to constitute this form of democracy. You say that you will embed it “throughout all aspects of the HE learning experience” but what constitutional form will that take and how will you hold each other to account? These are not questions unique to your own stated objectives, but are being asked all the time by people who desire democracy in their work as they do in their politics.

The question I am interested in then, is what steps might we take to reconstitute and transform our institutions into member-run, democratically controlled co-operatives? Institutions that enable us to reflect deeply on the conditions of present day knowledge production and truly put Student as Producer into practice?”